Learn the new legal obligations for the eletronic invoice

Eliminate paper and reduce costs by signing with security and legal validity.

In 2021, electronic invoicing becomes mandatory for public procurement, in accordance with the European Directive 2014/55/EU.

According to the recent changes introduced by the Decree-Law No. 14-A/2020 of 7 April, within the scope of the exceptional measures approved in the context of the COVID-19 pandemic, the deadlines established by article 2 of the Decree-Law No. 123/2018 of 28 December were altered, defining its compulsory adoption until the 31st of December 2020 for large companies, until the 30th of June 2021 for small and medium-sized companies and until 31st of December 2021 for micro-companies.

The Decree-Law No. 28/2019 of 15 February regulates several aspects about the issuance of invoices, including electronic invoicing - consult here the Decree-Law.

An electronic invoice is a document identical to the traditional paper invoice, maintaining an identical legal value, but with an entirely digital life cycle: the issuing, sending, receipt and storage of invoices takes place solely by electronic means. The authenticity of the origin and the integrity of the electronic invoice content must be guaranteed using a Qualified Electronic Seal, in case of legal entities, and a Qualified Electronic Signature, in case of individuals.

The main advantages of acquiring a qualified electronic invoicing certificate.

Guarantees the identity of the entity issuing the electronic invoice.

Guarantees the existence of secure mechanisms, which allow its control for the creation of electronic invoices.

Get to know the recent legal developments applicable to Electronic Invoicing. See here our press release on the subject and consult below the documents issued by the Portuguese Tax Authority and the National Security Office (GNS). 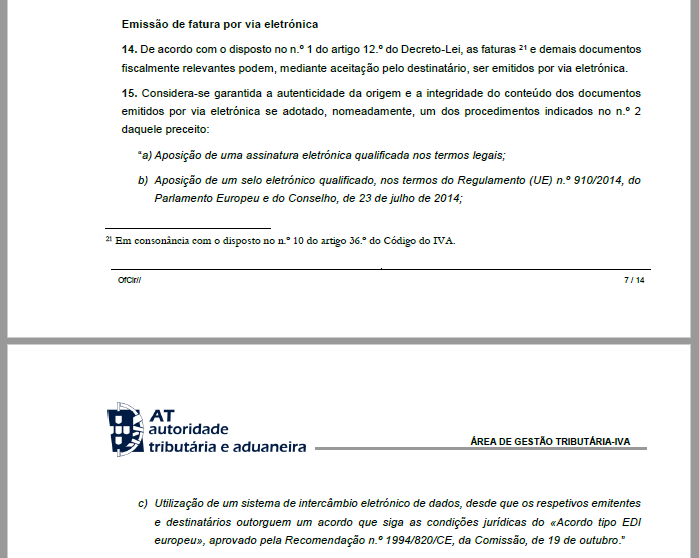 Letter of the Portuguese Tax Authority 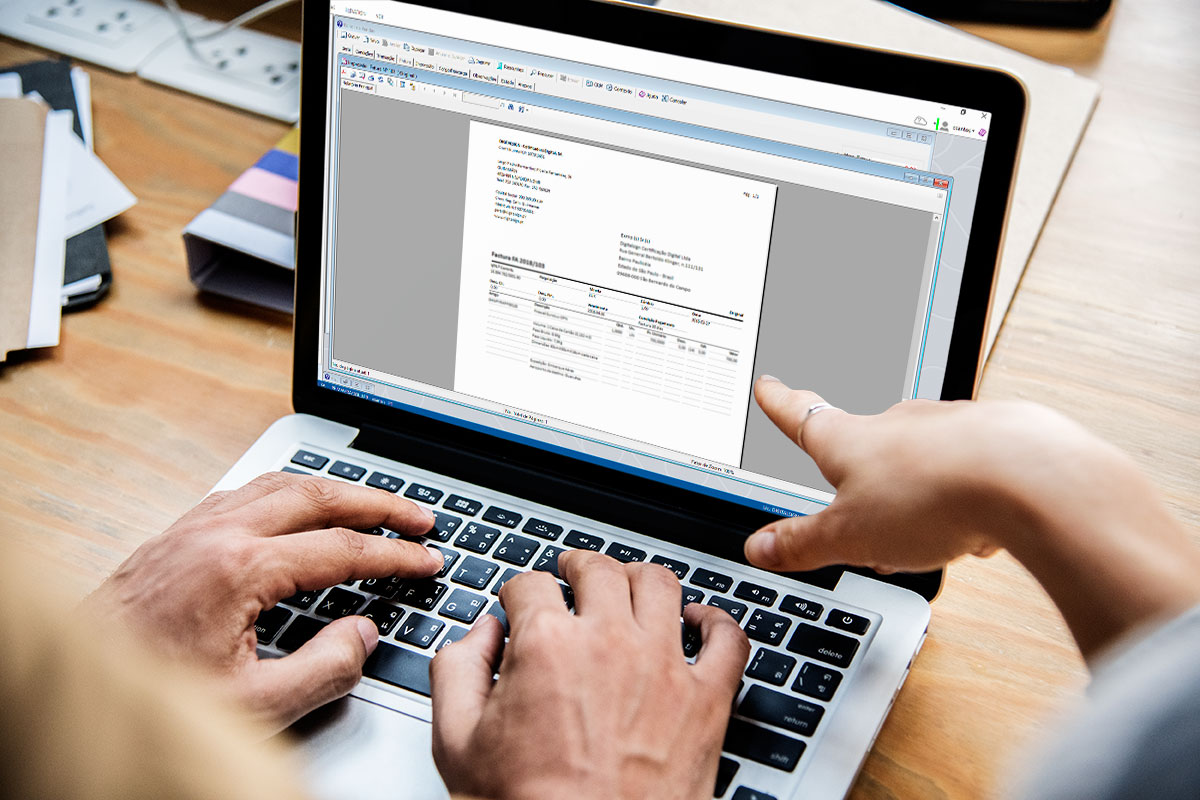 Ensure that your e-invoicing complies with the applicable legislation

Until the 31st of December 2020 it was possible to use an advanced electronic signature, but after this date, the use of a qualified electronic signature (or electronic seal) became mandatory.The aim is to ensure the identity of the invoice issuer and the integrity of its content, essential requirements to comply with the provisions of Art. 12 of the Decree-Law No. 28/2019.


Do you still have questions? Consult the press releases and white papers on the subject:

The legislation now requires all electronic invoices to be signed with a Qualified Digital Certificate (Qualified Electronic Seal), invalidating the use of Advanced Certificate, in force until then.

Update your electronic invoicing system before the deadline of 31/12/2020 and benefit from the best conditions.

A solution for affixing electronic seals to your invoices and sending them automatically.

If your invoicing software is not yet integrated with DigitalSign Certification Authority, you can use the CBS application, which guarantees full compliance with the applicable legislation, to sign your invoices and send them to your clients. A low-cost solution, very quick to install and operate.

DO YOU NEED ANY CLARIFICATION?

We prepared some answers for you ...

What is an electronic invoice?

An invoice is a commercial document whose issuance is generally mandatory for all transmitters of goods, or services providers, being an essential element for the Value Added Tax (VAT), which gives purchasers of goods or recipients of services a credit before the State, which is embodied in the exercise of the right to deduct the tax incorporated therein.

Is it necessary to wait for a regulatory diploma to start implementing the electronic invoice?

No. It is already possible to adopt electronic invoicing, containing the applicable legislation to all elements necessary for its rightful adoption.

Will electronic invoicing be mandatory in public procurement?

It is important to emphasize that some essential aspects of the electronic invoice regime are already regulated both in the VAT Code (Art. 36, no. 10) and in Decree-Law No. 196/2007, however, others, such as the format of the file to be used is expected to be defined through an ordinance, to be published until the entry into force of the mandatory electronic billing in public procurement.

What is the probative value of the electronic invoice?

The law clearly states its equivalence to the paper invoice, provided that the general requirements to which any invoice must comply with are met, plus the specific requirements for the electronic invoice.

Are there different types of electronic invoicing?

Those issued in a structured format file allow automatic processing by computer systems, but are not readable by the human eye, being the most common example the XML format, which is the typology adopted in the scope of public procurement.

Those issued in an unstructured file are created through a non-automated process and involve the use of optical character recognition technology (OCR). This is the case of invoices issued in PDF file, which are generally adopted within the scope of the private sector invoicing and for the final customer.

Can any taxable person choose to electronically issue their invoices or equivalent documents?

Yes. In general terms, taxpayers can electronically issue invoices or equivalent documents, as long as the authenticity of their origin and the integrity of their content are guaranteed through an advanced electronic signature or electronic data interchange (EDI).

A different situation results from the transposition of the Directive 2014/55/EU, through the Decree-Law No. 111-B / 2017, of 31 August, which amended the Public Contracts Code (CCP), considering that the issuance of electronic invoices in the scope of public procurement will become mandatory, in accordance with the deadlines indicated in point 2.

There is some tendency to confuse the electronic means of transmission used, with the form of the documents transmitted.

Provided that the authenticity of its origin and the integrity of its content are guaranteed by means of an advanced electronic signature or advanced electronic seal pursuant to Regulation (EU) No. 910/2014 of the European Parliament and of the Council of 23 July 2014 or electronic data interchange (EDI), as defined in the Commission Recommendation 1994/820/ EC, of 19 October 1994, any available electronic means of transmission can be used.

Can electronic invoices be sent by email?

Yes, as long as long as the electronic invoice contains an advanced electronic signature, and as long as the issuing entity is not obliged to use any specific platform such as the Electronic Invoice Portal in the Public Administration of ESPAP (mandatory for the entities provided for in paragraph 3 of Decree-Law No. 123/2018). However, it should be made clear that the entry of data in the body of the e-mail message is not accepted as an electronic invoice under the terms of the law.

In what format should the electronic invoice be transmitted?

In the scope of public procurement, the form of electronic invoicing should take place through a structured file, allowing the automation of the entire process. The format of this file will be defined through a ministerial directive, in accordance with paragraph 5 of article 299-B of the Decree-Law No. 111-B / 2017 of 31 August, but it still awaits publication, if, however, the UBL V2.1 format is adopted, according to the European standard EN 16931-2017. For more technical information on the format to be adopted, you can consult the following document, published by ESPAP:

In electronic invoicing, for the private sector, there is no obligation to use a specific format as long as its authenticity and integrity are guaranteed.

If I scan a paper invoice and send the resulting file to my customer, is it an electronic invoice?

No. The only two ways of issuing electronic invoices are those in which the authenticity of their origin and the integrity of their content are guaranteed, either by affixing an advanced electronic signature or in which these guarantees are assured by electronic data interchange, commonly referred to by the acronym EDI.

What type of certificate can I use for electronic invoicing?

In Portugal, the digital certificate legally required for electronic invoicing is the advanced digital certificate. This certificate must be issued by a certifying body duly accredited with the National Security Office (GNS), as is the case with DigitalSign. For more information on the topic, consult the Communications Guide for the Transmission of Electronic Invoices to the PA, starting on page 5.

Can I use the same digital certificate to sign invoices from different companies?

The digital certificate used to sign must be issued under the name of the entity issuing the invoices, that is, the taxable person. The purpose of using the certificate is to uniquely identify the issuer of electronic invoices.

Electronic invoices issued by one entity and signed by another legally distinct is not accepted by the Tax Authority, as it does not comply with the applicable law. This way, the aim is to guarantee the principle of authenticity of invoices and the issuer's responsibility, safeguarding that the entity signing the invoices is their author.

In this sense, if you use an electronic invoicing platform, always require that your invoices are signed with a digital certificate issued on behalf of your company.

I need to do electronic invoicing for a country other than Portugal, what type of digital certificate should I use?

It depends on the applicable legal requirements. In Spain, for example, the law imposes the obligation to use a qualified certificate to sign electronic invoices.

Thinking about its customers and considering this reality, DigitalSign is preparing the launch of a new product: the qualified digital certificate stored in software for electronic invoicing.

I already have a qualified digital certificate of representation. Can I sign my invoices with it?

Yes, as long as the certificate has no limitations on the scope of its use. It is also important to bear in mind that if you use a digital electronic seal certificate, intended exclusively for legal persons, you benefit from the fact that no personal data is shared, only the data of the organization.

If taxable persons resort to the electronic issuance of invoices or equivalent documents, should the lists of invoices issued and received be stored on paper?

How and who should file invoices or documents electronically issued and received?

In accordance with the provisions of paragraph 4 of article 52 of CIVA, invoices or equivalent documents electronically issued and received must be filed in electronic form, provided that the Tax Administration is guaranteed full access and in line to the data and the integrity of the source and content is ensured.

Taxpayers are required, pursuant to paragraph 1 of article 52 of the VAT Code, to file and keep in good order for the subsequent 10 years, all invoices or equivalent documents issued and received in electronic format. Mandatory filing can be done by the service provider itself or under the provision of services by third parties in the name and on behalf of the taxable person.

Certainly! This type of process depends, above all, on two factors: market adhesion and inter-company business rules. Coexistence between the electronic invoice and the paper invoice is inevitable.

Is it possible to resort to electronic invoice service providers based outside Portugal but within the European Union?

Yes, the Law allows the operation of the computer system or the data storage to take place outside the country. In this case, the taxable person being inspected must provide the Portuguese tax administration access from the national territory and ensure the necessary support, namely through the instruction on the procedures to be adopted to access the invoicing support computer system and to consult the data stored.

If you have more questions or can't find what you're looking for, please contact us